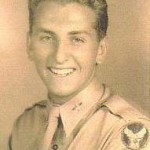 months Stalag #1 Barth on the Baltic.

1st. Lt. Harry Selling was shot down over Berlin on Sept 12, 1944 in his B-17 during a bombing mission. He was the pilot and the only survivor of the crew of nine. His incredible story follows. He was captured and spent nine months in Stalag 1. Harry Selling is a member of the Freedom Committee of Orange County, Ca.

Cpl Harold Scharfe was a Canadian Commando and participated in the Dieppe raid on the coast of Normandy, France on August 19, 1942. His unit suffered many casualties and 907 men give their lives on the beach that day. He was captured and spent three years in Stalag’s 8-b, 2-d and 357. His incredible is listed below. The rest of his story will be posted next week. Hal Scharfe is a member of honor with the Vietnam Veterans of America, Chapter 785 in Orange County, Ca.

Eight hundred and fifty bombers hit at targets deep in Germany. The route took the formation north and east of Berlin where they turned south to the aluminum works at Lauta. Another Wing which overran the 457th caused the two groups to scatter. The Luftwaffe took this opportunity to strike with 50 to 60 planes and caught many bombers out of formation. The other wing took most of the attack and lost six to eight of their planes. The 457th had one plane hit by fighters, s/n 42-31383, piloted by Lt. Harry Selling. The plane was lost. The group reported bombing results were good. Another plane piloted by Lt Lauren Spleth, s/n 42-97662, had two engines knocked out by flak. The plane dropped down and flew back alone and arrived at Glatton almost two hours behind the rest of the group.

Plane s/n 42-31383, named “American Eagle”, and piloted by Lt Harry Selling was attacked by FW-190’s just after the turn on the IP. Cannon shells from the fighters hit the pilots compartment and Bomb bay. The plane spiraled down, caught fire and exploded.

The following 1945 account is by the only survivor, Pilot Lt Harry Selling:

“Everything normal till flak area reached over Berlin. Group commander took evasive action and in so doing shuffled the deck with another group. As I dropped under another ship, many fighter attacked, shooting the tail off my plane. Ship went into climb and then stalled and then into a tight spin. When ship was hit, copilot left seat going down through catwalk. Fire broke out in the cockpit. Last I saw, copilot was standing in catwalk covering his face. I remember ship trembling and imagined wings sheared off. I was knocked unconscious. When I regained consciousness everything was quiet. I found myself in the V of the windshield. Tried to get out through the window and realized I was floating down in the wreckage of the pilots compartment. Having on a backpack, I went out at about 800 feet. After parachute opened I was aware of pieces of wreckage falling around me. I was picked up about three hours later. I did not see any of the crew members or wreckage of the ship.”