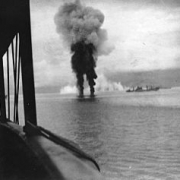 War in the Pacific Guadalcanal Chronicles

Guadalcanal Island is an Island in the Solomon Group, 100 miles long, and 50 miles wide. The ships comprising Task Force 62 and 67 were attack transports, cargo ships, heavy and light cruisers, destroyers and aircraft carriers whose purpose was to land assault troops, reinforcements, and supplies to advanced bases. Basic armament of the transports and cargo ships were 3″.50 AA, 20 mm. AA, 50 cal. water cooled AA weapons and one 5”51 surfaced gun located on the stern. This was the most bitterly contested action of war in American history since the campaign of Northern Virginia during the Civil War. It was composed of: